Shlomo Dowen, National Coordinator of the United Kingdom Without Incineration Network (UKWIN), commented: “I commend the report’s calls for maximising recycling, its recognition that put-or-pay clauses in incinerator contracts can undermine incentives to recycle, and the Committee’s recommendation that there should be a moratorium on the incineration of recyclable waste”.

UKWIN responded to EFRACOM’s call for evidence with a written submission, and was subsequently invited to provide oral evidence to the Committee.

EFRACOM cited UKWIN’s criticism of Government inconsistencies, quoting: “The pro-recycling message is being undermined by perverse financial incentives to incinerate and compost material that should not be…the Department for Communities and Local Government allows planning consent for incinerators that go against Government policies on climate change, energy efficiency and waste hierarchy”.

The Report calls for a Minister to be responsible for a consistent approach from the Government, and UKWIN hopes that this will bring an end to harmful incinerator subsidies and an end to the baffling investments from the Green Investment Bank in incinerator projects that are far from green.

UKWIN provided the Committee with evidence that incineration harms recycling, including what the EFRACOM report describes as “data showing an apparent correlation between high rates of incineration and low rates of recycling” (see table and chart, below). 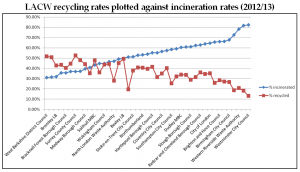 Many long-term waste management contracts include ‘put-or-pay’ clauses requiring local authorites to pay for incineration capacity even if they do not use it, reducing their financial incentive to recycle.

EFRACOM’s report notes that: “When we asked the Minister how the Government ensures that only genuinely residual waste is sent to incinerators, he told us that the key pressure is gate fees—i.e. the charge that must be paid to dispose of waste in an incineration facility. However, we are concerned about the effectiveness of this singular mechanism following evidence we received about ‘put or pay contracts’ and negative impacts on recycling rates.”

The report recommends that: “…Defra should aspire to achieve recycling rates at the maximum feasible level…” and that Defra should: “…ensure that waste sent to…incinerators is only genuinely residual waste” and “assess whether the use of gate fees is sufficient to achieve this aim and to confirm whether additional interventions, such as regulatory requirements to remove dry recyclables or higher gate fees have been fully considered”.