Ed Miliband has called for the Green Investment Bank (GIB) to have “real powers to borrow and attract investment”.  The United Kingdom Without Incineration Network (UKWIN) and Biofuelwatch have responded by saying that any increase in funding or powers for the GIB should be linked to a responsibility to be greener in their investments. 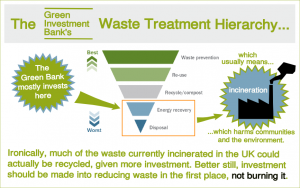 Almuth Ernsting of Biofuelwatch said: “It is not right that the Green Investment Bank is making very un-green investments in waste incineration and biomass. If they are to be given more powers it should come with a ban on investments in these unsustainable technologies.”

Shlomo Dowen of UKWIN added: “There is no place for incineration, gasification or pyrolysis in the circular economy. The GIB should not be acting as if we can burn our way out of climate change – instead they need to be investing in alternatives to incineration that will preserve, rather than destroy, our valuable resources.”

Biofuelwatch, UKWIN and local environmentalists protested at the Green Investment Bank’s two Annual Review events in London on 25th and Edinburgh on 26th June as part of their calls on the GIB to stop investing in waste incineration and biomass. This included calls for the revocation of the Bank’s controversial investments in Drax and several other biomass and gasification projects.

According to the report More Jobs, Less Waste: “For the United Kingdom, if an ambitious but achievable recycling target of 70% for municipal waste was set and achieved by 2025, then conservative estimates suggest that across the UK this could create 29,400 new direct jobs in recycling, 14,700 indirect jobs in supply chains and 7,300 induced jobs in the wider economy relative to 2006. Of these potential 51,400 total new jobs some 42,300 might be in England with an estimated 4,700 in Scotland, 2,600 in Wales and 1,800 in Northern Ireland.”