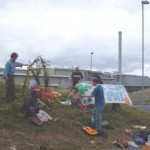 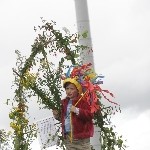 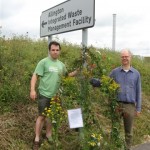 The action, part of this year’s Medway Climate Camp, received press coverage (as well as police attention). The Kent Messenger report quotes Stuart Jeffery, from the Maidstone Green Party, one of those at the wreath laying ceremony, who said:

While the direct emissions from Allington are likely to be lower than those from older incinerators, dangerous chemicals are still produced by incineration and they still need disposal. Fly ash and grate ash from incineration give rise to major concerns regarding health and although it is generally sent to landfill, some will still find its way into the air.