Covanta told to take a hike

On Sunday the 25th September at 12 noon, members of United Valleys Action Group (UVAG) took part in a sponsored walk, nicknamed “The Downwind Walk”, across the Mountains to raise money for their tireless fight against Covanta’s proposed “Monster Incinerator”.

Meeting at the proposal site at Brig-Y-Cwm, adjacent to another controvercial site – the opencast Ffos-Y-Fran, the protesters gathered, armed with wet weather gear just in case. They were waved off by Terry Evans, who provided the transportation and helped organise the walk, and Eddy Blanche, another UVAG member from the Fochriw branch, who took some photographs. 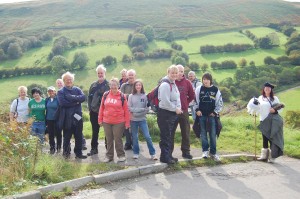 The weather stayed fine, and the views as you can see from the photographs are absolutely astounding. The hideous blot on the landscape that Covanta’s Incinerator would cause would undoubtedly undermine the natural beauty of this place once again.

Many burial chambers of historical importance reside among the mountains, some going back more than 6,000 years. Besides the risks involved to human health, wildlife has returned since the closure of the mines, species such as the Red Kites, Lapwings, Herons and Ravens are now abundant in the area. Obviously they rely on the natural habitat, fresh clean water and the rivers unpolluted and filled with fish to feed them and to nest.

This area should be conserved not Covanta’d!

Back to the trek, breathtaking views, fresh air and a sense of purpose was shared by all who took part, some having met for the first time that day. 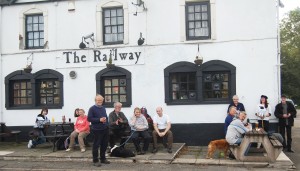 The walk was led by seasoned walkers Bob Francis, Gerald Mahoney, John Williams, Colin Jones and Paul Humphries, who put the youngsters to shame by taking up a pace that made the walk look easy. Everyone thoroughly enjoyed the day, including the two dogs who came to give their support. After four and a half hours of walking and legs aching the campaigners finally arrived at their destination in Nelson and went for a well deserved pint.

The day also gave some the opportunity to become more familiar with the area and see exactly where Covanta propose to build their incinerator, and the “fallout” areas surrounding the proposed site visible from the top of the mountain, where the five Counties are in full view.

Campaigners expressed concern that Merthyr Tydfil, Caerphilly, Cardiff, Newport and Abergavenny, and the areas beyond would be affected from the pollution that the proposed Covanta incinerator would release into the air.

UVAG have expressed their thanks to everyone who took part, including: Joy and Sean Morgan, Shauna Sawyer, Bonnie Grant, Debbie Price and Baarbaara The Sheep, Anna Webb-Price and Phil Price, The Austyn Family of Chris, Alyson, Tom and Emily, and to all those who helped raise over £500, on top of the £160 raised at the table top sale in Nelson on Saturday September 24th.

UVAG is constantly fundraising whilst remaining active in their campaign. They took a 13,000 signature petition to David Cameron at 10 Downing Street on 25th August 2011. UVAG members also took their written submissions to the Infrastructure Planing Commission (IPC) in Bristol in time to meet the deadline of the 12th September.

Full stories are available in the archives at www.walesonline.co.uk/news/south-wales-news/merthyr/ (just search for UVAG)

For much more information please visit the Taf and Rhymney Valleys Community Action Group (aka The No Monster Incinerator Group) website.

S4c’s investigative program Taro 9 was shown on 18th September after being contacted by UVAG members featuring Meryl Darkins from the Tredegar branch of UVAG worried about her already ill health, and to quote the No Monster Incinerator Group in Merthyr Tydfil:

The program is only 23 minutes long and worth watching. Filmed locally around Merthyr, and in America where they look at Covanta’s appalling record on exceeding emissions limits. Also includes UVAG members taking their petitions to Downing Street.