Its happening all over the UK. Telford PAIN working with Safe Waste in Shropshire, (Sherwood Forest, Rainworth) PAIN working with NAIL to host the UKWIN AGM in Nottingham, and now Gloucestershire Friends of the Earth Network (GFOEN) have joined forces with Safety in Waste and Rubbish Disposal (SWARD), and local residents of Javelin Park area, to demonstrate outside the Industry Day Conference where the Gloucestershire County Council will outline their £646 million PFI contract to the waste industry for the first round of bidding.

The protesters want to ensure that the companies know that there is major local opposition to incineration. 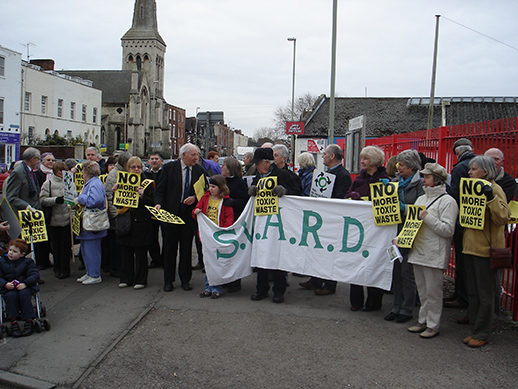 The County Council has confirmed that they would expect the contract to include building a new facility. It has used incineration as its model for its bid for £92 million PFI credits and has purchased Javelin Park, Quedegely for its preferred site for a new facility at the cost of over £7 million. Demonstrators fear this shows a preference for a large incinerator on a single site whose toxic fly ash is likely to end up at Wingmoor Farm, Bishops Cleave, Gloucestershire. It is acknowledged by the European Union, the Government and the Environment Agency that incinerators produce toxic fly ash when residual waste is burnt.

Gloucestershire has been the dumping ground for much of the UK’s toxic incinerator ash for 12 years now; this has to stop. Whatever technology is chosen to deal with Gloucestershire’s residual Waste must be one that does not produce any hazardous residues.

GFOEN and SWARD believe that a new approach is needed that avoids toxic fly ash and would help new small and medium sized businesses to take advantage of new technologies in the handling and use of waste that will benefit local communities in Gloucestershire. It is short sighted of the County to consider committing to a large scale incinerator with a long term contract which will tie up increasingly valuable resources by feeding an incinerator for 25 to 35 years.

What we need is to increase recycling rates and to develop high quality recyclates by having greater separation at the kerbside to obtain the best commercial benefit. Even now glass and paper companies are importing source separated waste because of the difficulties of obtaining enough in England, where so much is contaminated co-mingled mixed collections which usually go to China.

Action and decision making on waste should happen within local communities where the waste arises, and when there is a need, small local residual waste management projects on short term contracts on a few local sites around Gloucestershire for the benefit of local communities.

The invitation to bid was put out to tender on the 4th February 2009 in the Official Journal of the European Union and is to close on the 13th March 2009, after just 27 working days.

The County has announced that the next stage will only involve 3 to 10 bidders. How can the County seriously say that 27 working days is sufficient time for anyone fresh to the proposal, to consider all the ramifications involved and be able to come forward with an expression of interest strong enough for them to get into the selection list, when you consider that the contract is worth £646 million. Is all this a charade and where is the value for money for the taxpayer who will be paying for it? Add to this a feeling of inevitability that the result will be a single large scale incinerator. This is why it is so important to say NO now before it is too late.

Gloucestershire Friends of the Earth Network have launched a petition to say NO to a large scale incinerator which is available for downloading on their website.