Moving Away from Incineration Towards a Circular Economy: Policy Suggestions for England’s Green Recovery (November 2020)

Action is needed to address the serious threats posed by waste incineration overcapacity, the burning of recyclable and compostable material, excess waste generation, and market failures caused by the price of incineration not reflecting its environmental and social harm.

UKWIN sets out the case for England to:

Presentations from the Online Meeting for MPs, Constituents and Peers to Discuss UKWIN’s Policy Suggestions

UKWIN Presentation: Moving away from incineration towards a circular economy

The graph below, which uses data produced by Defra, clearly shows the large increase in incineration in England, particularly over the past ten years. 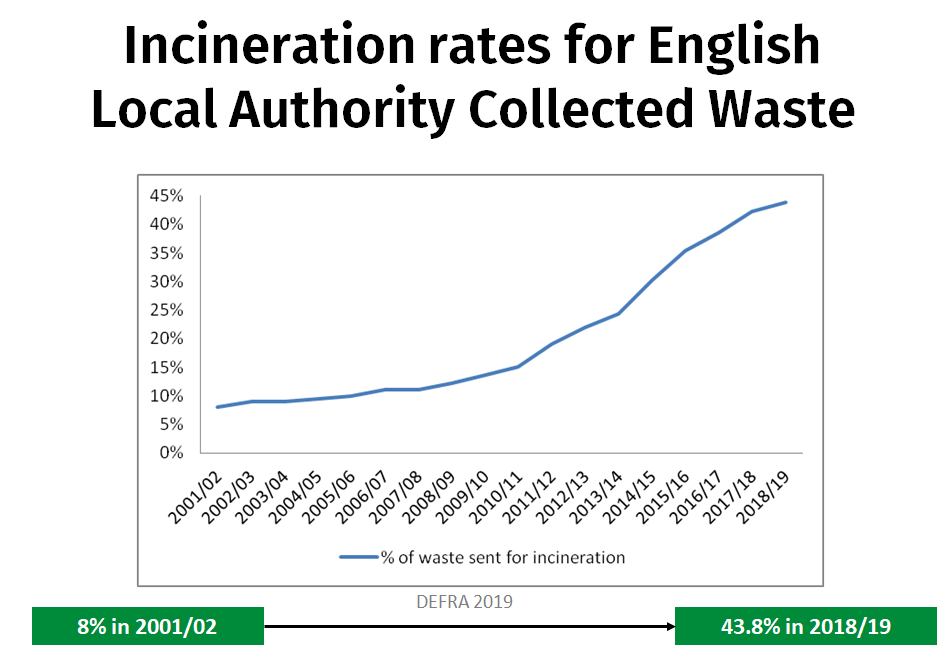 Some regions – like London, the West Midlands, and the North East – have a cluster of existing incinerators. 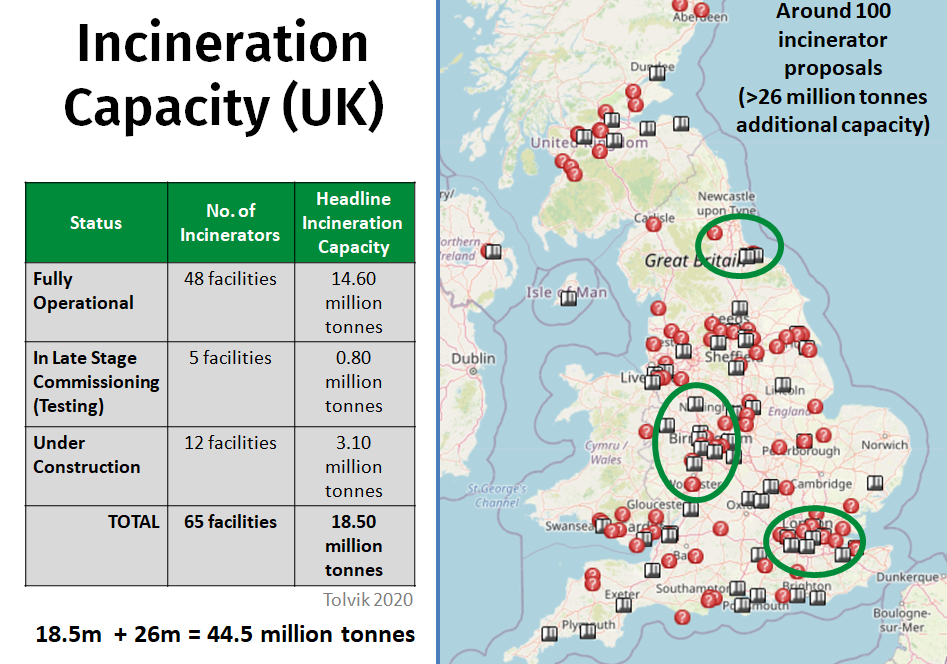 So…what impacts are all of these incinerators having on our recycling rates?

The graph below shows recycling and incineration rates in different English regions. Looking at the right-hand side of the graph, we see that in 2018/19 London, for example, recycled only around 30% (as shown by the red line) while it incinerated nearly 60% (as shown by the blue line).

As Durham University’s Professor Gregson observed, the areas with the highest levels of incineration have the lowest recycling rates. The only way recycling can be increased – e.g. in places like London, the West Midlands, and the North East – is to send less for incineration.

This bring us to our next question: What are we sending for incineration? 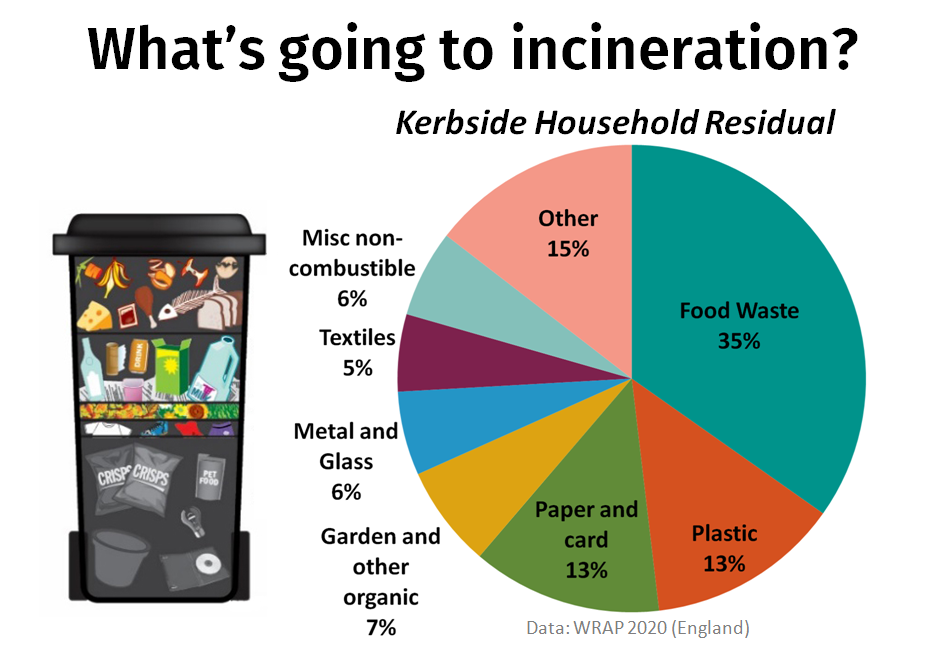 If we look at what householders are throwing away, we find around 35% is food waste; 26% is paper, card or plastic; and much of the rest is either compostable (like garden waste) or does not burn (e.g. metal, glass, and brick).

Whether we look at household waste or commercial and industrial (C&I) waste, Defra and WRAP both found that between around 75 and 80% of the so-called ‘residual’ stream could and should have been recycled or composted.

Burning material that should be recycled or composted is a huge loss to our economy. Incineration wastes finite resource, squanders nutrients needed for healthy soil, and  is a ‘leakage’ from the circular economy. Far more jobs are sustained through recycling and the Circular Economy than through incineration.

In addition to wasting resources, incineration is accompanied by climate harm that is not compensated for by the incineration industry. About half a tonne of fossil CO2 is directly emitted for each tonne incinerated. Electricity generated through incineration comes at a higher carbon cost than electricity from coal or gas. To decarbonise, the UK will clearly need to incinerate less.

As the Committee on Climate Change told the UK Government earlier this year, “Achieving significant greenhouse gas emission reductions in the waste sector requires a step-change towards a circular economy, moving away from landfill and incineration and towards a reduction in waste arisings”.

So, what policies could move us away from incineration and towards a circular economy?

We anticipate that plenty of existing incineration capacity will be freed up as more material is diverted from incineration to recycling and composting, in line with the Resources and Waste Strategy. Other benefits of a moratorium include protecting air and soil quality, and supporting the move to net zero carbon.

Secondly, as the Zero Carbon Commission noted in September, a tax on incineration would increase incentives to recycle more and to generate less waste. Even if the incineration tax were set at just half the rate of landfill tax, it would incentivise redesign, reuse and recycling, and would generate around a billion pounds a year to invest in the Green Recovery.

Additionally, UKWIN advocates on behalf of targets to reduce both total and residual waste. These waste minimisation targets would be in line with Defra’s October 2020 statement that reducing residual waste would help address some of the adverse environmental impacts to air, soil and water caused by incineration.

Contrary to statements made in an attempt to protect the incineration industry, there are plenty of better ways forward that can be part of a circular green recovery.

The policies proposed by UKWIN can support the good work already being done. England can learn lessons from Scotland and Wales, as well as from elsewhere. We could be investing in education, and waste minimisation efforts, and reuse schemes and reuse parks, as well as the redesign of products to make them more durable and easier to repair and recycle.

The policies outlined by UKWIN can help us address these problems, whilst creating hundreds of thousands of green jobs as part of supporting the move towards a circular economy.