On Tuesday 2nd November 2010 the House of Commons, Committee Room 10, was the venue for a gathering of anti-incineration / pro-zero-waste campaigners and interested MPs. The event, organised by Gloucestershire activist Diana Shirley, was chaired by Martin Horwood, the Liberal Democrat MP for Cheltenham, and featured presentation delivered by: 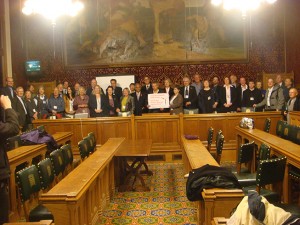 According to event organiser Diana Shirley:

The event was organised by GlosAIN (Gloucestershire Against Incinerators), the network Gloucestershire-based groups, and GlosVAIN (Gloucestershire Vale Against Incineration), on behalf of campaigners across the country who oppose waste incineration and who work to promote sustainable alternative approaches. The main objective of the evening was to raise awareness among parliamentarians and policy makers about the issues and arguments for “zero waste” strategies, and to highlight the problems associated with incineration. This objective was certainly achieved! 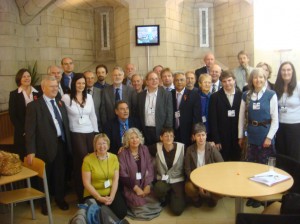 Professor Paul Connett, who recently spoke to the Division for Sustainable Development at the United Nations on ‘Zero waste – theory and practice around the world’, told those assembled at the House of Commons that:

Instead of burning our discarded materials, we need to move towards a zero waste system, where rubbish is considered a resource to recycle. Incineration, including gasification, detracts from recycling, since they don’t work without burning good recyclable materials. Incinerators also emit more greenhouse gases than when the organic component is treated by anaerobic digestion.

Professor Connett issued a challenge to the Health Protection Agency (HPA) to either refute, point by point, the evidence of Professor Vyvyan Howard [Download], or withdraw the HPA’s claim that no research exists to show the health damage caused by incineration.

Each year the UK sends over £650 million of recyclable materials to be dumped in landfill sites or burned in wasteful incinerators. That is a massive waste of resources. Over seventy thousand new jobs would be created in the UK if we recycled 70% of our business and council-collected municipal waste. Given that the Flanders Region in Belgium has achieved and maintain a 70% recycling rate over several years, and that both Scotland and Wales have set 70% recycling targets for 2025, why should England be left behind?

Incineration of recyclable and compostable material is not just bad for the environment, it is a massive waste of resources and a huge unnecessary cost to our cash-strapped economy. As the latest waste data shows, we are producing less and less residual waste each year, and we are recyling and composting more and more. This is the direction we need to continue to travel – there is therefore no need or place for incineration in a
genuinely zero waste future.

BioRegional’s representative Jonathan Essex spoke of the benefits of reusing construction and demolition material, explaining that:

Reclamation and reuse helps reduce climate impact not just reduce waste to landfill. Reuse creates 25 jobs for every job associated with incineration. We can learn a great deal from other countries where EcoParks are a thriving part of the local economy. Templates already exist for the layout and operation of EcoParks based on a social enterprise model.

Barbara Farmer of SWARD explained how:

The dioxins and heavy metals that are not permitted to leave incinerator chimneys are scrubbed out by passing the gasses through lime filled filters, and the resulting ash, known as air pollution control (APC) residues, is brought in tankers to Bishops Cleeve. It comes from Lockerbie in Scotland, Kent, Slough, Bolton and Somerset, to give you an idea of the miles travelled. This site is referred to in incinerator planning applications as a “specialist landfill site” but frankly it is the cheapest, crudest method available. The ash is pumped into silos, mixed with leachate drained off landfill, or contaminated garage forecourt water, or other hazardous liquid waste. After mixing it is dumped in open trucks and driven across the site to be tipped.

According to a recent (May 2010) report [link] by Greenfield Science’s Dr. Andy Tubb:

Occasionally it has been claimed that what appears to be dust is in fact steam. Steam may occur where there is an exothermic chemical reaction of the lime with water or through the release of heat stored in the lime when it comes into contact with water, or both. In these cases there will also be sufficient energy to entrain dust with the steam, and the emission will contain both. A hot emission of steam and dust is likely to be dispersed more widely by the wind than a cold mechanically generated dust cloud, because the heat will provide thermal buoyancy to the emission…The evidence gathered is consistent with APC dusts escaping from Wingmoor Farm hazardous landfill site, and suggests that these make a considerable contribution to the local environment.

Dr. Tubb’s conclusion is supported by an Environment Agency report that notes:

From the proportional dust mixing model, the study showed that dust associated with APC could be detected in some directional dust samples collected beyond the site boundary. On one occasion, about 250m from Wingmoor Farm, the dust was strongly associated with APC (from DustScan Directional Dust Characterisation 2008, Wingmoor Farm Landfill Sites and Bishop’s Cleeve, Gloucestershire, for the Environment Agency Tewkesbury, Final report May 2010).

We must stop the myth that incineration is an answer to landfill. Incinerators create huge problems, one of which is the stockpiling of persistent organic pollutants (POPs), which will never ever go away, which are known to be harmful to human health and which the UK has signed up to reducing and ultimately eliminating, and yet which are being mixed with dirty water and allowed to blow straight across our villages. A technology that produces hazardous and eco-toxic waste (in the form of ash and residues) is not sustainable, nor is it either safe or sensible.

One of the campaigners present, Viv Stein, Brent Friends of the Earth Spokesperson, said:

Incinerators are a dead technology, sold on spin. No new plants have been approved in the United States since 1995. The UK is now being targeted by companies keen to make a profit here – at the expense of the public purse, local communities and the environment. Incinerators bind local Councils to costly and inflexible long term contracts which are bad news during the recession. Councils sometimes even have to pay penalties because they are not providing enough material to burn.