On Friday 23rd April 2010 Friends of the Earth Brent, Barnet & Enfield and Camden local groups flew an inflatable flying dinosaur, the “Brentcrossasaurus”, and released balloons at Clitterhouse Playing fields in Cricklewood. An attempt was also made to fly a kite to the height of the 140 metre incinerator chimney proposed for the Brent Cross Cricklewood development. The groups were warning of UFD: not unidentified flying dinosaurs, but Unidentified Flying Discharges. 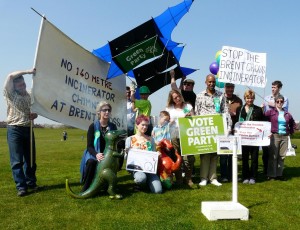 The stunt was part of an event organised by Barnet Green party, supported by members of the Brent Cross Coalition, of which local Friends of the Earth groups are members.

Waste gasification, like conventional incineration, emits toxic nanoparticles we can’t see. Just as volcanic ash damages jet engines unlike normal fire ash, so the nanoparticles that the gasifier will emit are far more toxic than regular car exhaust soot and tyre dust. Nanoparticles from municipal waste gasification can transmit heavy metals and other toxins into delicate organs like the brain, as with conventional incineration.

Municipal waste gasification is actually a dinosaur technology: it’s still turning the products of oil extraction into global warming gases and pollution, it requires that recyclable material such as plastic is burnt to help provide a heat source, and it leaves large quantities of toxic ash.

If anyone has seen any of our five balloons released, then they will also receive emissions from the proposed chimney. We would love to know where the chimney products are blowing to! I used to think that it would be a good idea to get heat from vapourising rubbish. But after hearing the evidence from a world leading Environmental Chemist, Professor Paul Connett, I was shocked. Apparently the nanoparticles produced are so small they can’t be regulated, and can travel for miles. Rather than getting stuck in your lungs they pass through into your blood then brain. The scientific evidence is so clear. He told us that it would be stupid to site a gasifier near any community.

We think that district heating and power stations are a good thing, but this is incineration in disguise; the developer is misleading people. It is not the gasifier that provides heating to local homes- it’s the combined heat and power station. It is perfectly feasible to run that with natural gas or other safe fuels not produced by incineration techniques, which as the Professor states are not proven for domestic waste. In fact, plants in Karlsruhe and Woollongong were unsafe and had to be closed.

If anyone finds a Brent Cross balloon please email bxc@brentfoe.com.

Mike Freer, who resigned as Council Leader to become a parliamentary candidate for Finchley and Golders Green, told both the Planning Committee and a hustings held on 11 March that he had been informed that the air leaving the gasifier would be cleaner than that going in. On neither occasion did Freer declare his source.

Jonathan Joseph, chair of the BXC partnership, has declared in several letters to local media his wish to dispel “myths” about the scheme.

If Jonathan Joseph is so keen to counter myths about the scheme, as he makes out, then why doesn’t he repudiate any suggestion that the air discharged by the gasifier will be cleaner than the air going in? The BXC application documents themselves noted that the chimney height is required to disperse nitrogen dioxide emissions so as to reduce local air quality breaches caused. The GLA also insisted on this.

Other emissions from waste gasification can include dioxins and furans, nitrogen oxides and heavy metals.

The petition to call the development in for a public inquiry is available at: http://www.petition.co.uk/campaign_for_a_sustainable_brent_cross_cricklewood_development

The Coalition blog is at www.brentcrosscoalition.blogspot.com